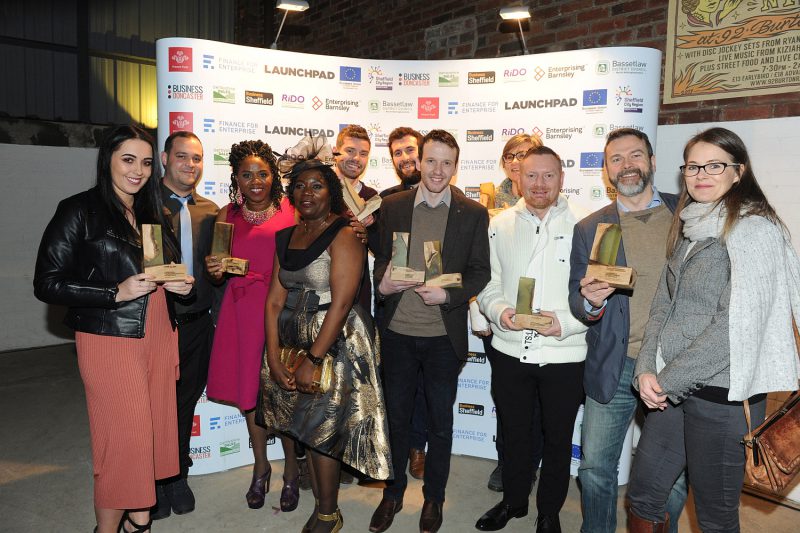 Nine of the Sheffield City Region’s newest and most promising entrepreneurs have been given special recognition at a unique awards ceremony designed to celebrate and showcase the achievements of individuals who have entered the world of self-employment during the past two years.

Organised by the Sheffield City Region’s Launchpad programme, the event took place at 92 Burton Road, Sheffield and saw the new entrepreneurs go head-to-head in eight different categories with an overall winner, Launchpad Champion 2018, chosen by an audience vote on the night.

Sheffield’s next generation of entrepreneurs enjoyed a particularly successful evening, with five of the nine awards up for grabs being presented to businesses based in the city. Five Rivers Coffee Co, based in Broomhill, won the Start-Up Business of the Year award; nursing and social care agency Trios Healthcare based in the Wicker walked away with the Rising Star Business of the Year award; Paul Thompson of market research consultancy Willdoo Limited was crowned Entrepreneur of the Year; Annie Bowman, founder of Hoyden’s Workwear for Women was named as Aspiring Entrepreneur of the Year and personalised chef knife manufacturers APOSL Knives took home the Made in the SCR award.

However, it was Conisborough-based Andrew Ashworth who enjoyed a particularly memorable evening, not only being crowned the winner of the Inspiring Achiever award, but he was also chosen by his peers as the first Launchpad Champion during a live vote held on the evening.

Elsewhere in the City Region, Doncaster-based digital marketing and creative agency Loud Crowd scooped the Growth Business of the Year award, whilst Barnsley’s Abbie Allert, owner of handmade children’s clothing business Mamma Made It, was named as Young Entrepreneur of the Year.

The Launchpad programme was launched in April 2016 and provides entrepreneurs and start-up business owners throughout the Sheffield City Region with fully funded business support and advice via one-to-one meetings, workshops and a dedicated mentoring programme, ensuring the next generation of entrepreneurs are prepared, confident and celebrate success.

Since the programme was launched, almost 800 new businesses have started within the Sheffield City Region, and Launchpad has provided over 25,000 hours of support to more than 2,700 individuals to help them on their way to starting and growing their business.

“Launchpad celebrates its second anniversary this year and we wanted to draw attention to some of the truly amazing and inspirational work being undertaken by new entrepreneurs based in the Sheffield City Region and highlight the important contribution small businesses make to the local economy.

“Launchpad was created to help break down the perceived barriers to self-employment and many of the businesses supported by the programme have gone on to enjoy a significant amount of success. Many have helped to create jobs for others and some are successfully resurrecting centuries old traditions which are synonymous with the region, such as knife making.

“Of course, we also recognise that entrepreneurs come in all shapes and sizes and as well as those working at the cutting edge of technology and manufacturing we recognised that with the right support and assistance in place, anyone can be an entrepreneur and many have successfully started to earn a living from the hobbies and interests they enjoy.

“This is the first time we’ve held the Launchpad Awards, and the standard of entries was very high. I’d like to pass on my congratulations to all the award winners and finalists and a huge thank you to everyone who played a part in ensuring the night came together perfectly.”

For more information on the Launchpad programme and how it operates throughout the Sheffield City Region, contact the SCR Growth Hub Gateway on 03330 00 00 39 or visit www.scrlaunchpad.co.uk