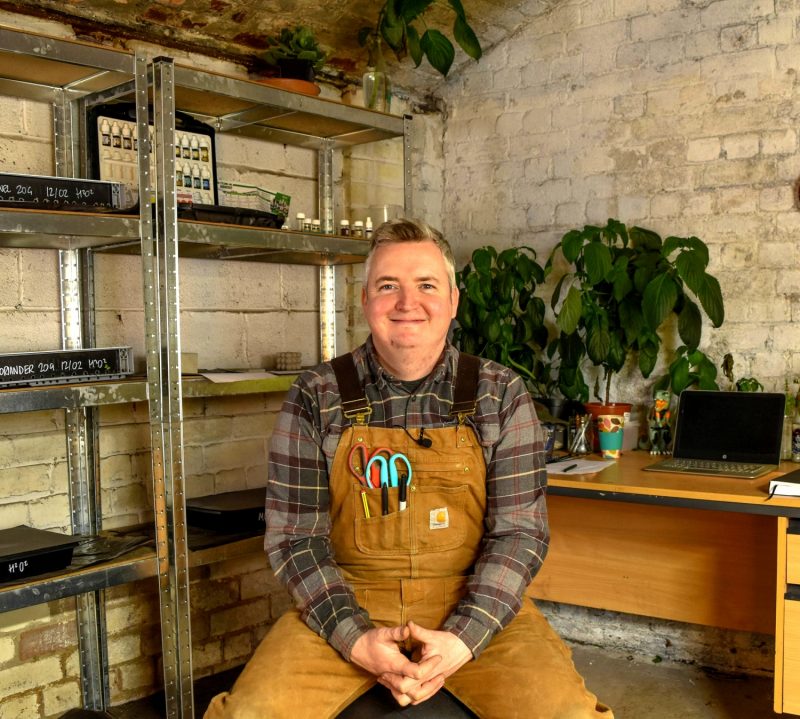 Under the streets of Kelham Island there's a quiet farming revolution taking place.

A former builder who dreamed of the good life has transformed the forgotten underground vaults of Kelham Island into a haven for producing organic edible produce after calling on help from Launchpad, a unique programme which provides business support to new and aspiring entrepreneurs based in the Sheffield City Region.

Luke began to sow the seeds for a new business venture six years ago when he realised the need for a change in the emerging technology hydroponics – which replaces soil with organic feed – could be used as a way of producing leafy vegetables and herbs without the need for soil or natural light. After realising hydroponics was being adopted across the world but was not as sustainable as it could be, Luke began experimenting with the concept, in a bid to play his part in tackling food shortages, as well as making a positive impact upon climate change.

Having spent more than 20 years working as a builder, Luke was no stranger to the world of self-employment.  When his partner began selling street food at Sheffield’s Peddler Market, it encouraged him to relocate to the steel city to dedicate his time to growing his budding bionics business.

One of the first decisions Luke needed to make was the structure of his new business, but unsure how to set up and run a limited company, when a close friend recommended the Launchpad programme, he decided to reach out for help.

Designed specifically to support business owners and new entrepreneurs based in the Sheffield City Region, Launchpad helps business owners to access a wide range of free training workshops, as well as one-to-one sessions with knowledgeable business advisers. Working with experienced business adviser Andrew Bunn, Luke began to learn about the differences between being self-employed and running a limited company. At the same time the one-to-one support sessions helped Luke to develop and refine his business idea and overcome the hurdles during his all-important first few months of trading.

Within a matter of weeks, he had secured a lease on unused cellar space hidden under 92 Burton Road and he began putting his building skills to good use, transforming the empty space into the city’s first underground bioponics farm.

Since launching Leaf + Shoot the company has seen rapid growth, selling a wide selection of fresh produce to local restaurants, and delivering directly to customers around Sheffield.  As part of his commitment towards building a sustainable, green business, Luke took the conscious decision to eliminate plastic from his business wherever possible, whilst the nutrients fed to his plants uses waste food, paper, used coffee and ash which is composted and turned into organic feed. To his surprise, he quickly discovered the feed not only helped his plants to grow quickly, but the nutrients meant his produce was bursting with flavour.

As Luke sets his sights on scaling his business further, he plans to continue working with Launchpad and is confident the success he has enjoyed to date will not only inspire others to explore bioponics in the future, but challenge the existing industry’s upon wholesale chemical nutrients, frequent use of plastics, and complex barriers to entry. Simply put, Luke is hoping to provide good old fashioned tasty greens, using new age methods and techniques.

“Bioponic vertical farming may sound like something straight out of the world of science fiction, but it is a sector which holds a lot of potential for growth and more importantly, offers solutions to issues like wasted food, inefficient traditional farming techniques, soil degradation, and address the challenges posed by climate change and global food shortages.

“As a child I would regularly help on my mum’s allotment, and I’ve always thought there’s something quite special about growing and harvesting your own food.  As I began to learn about bioponics, I quickly realised most companies in the sector used high-tech, state-of-the-art equipment and facilities which typically required significant levels of investment yet delivered few environmental benefits. I wanted to create a way of making the technology far accessible to all. Going forward, I am hoping that Leaf + Shoot won’t just become well known for our produce, but a company which will help to inspire others to explore bioponic growing, helping us all to play our part in building a greener, more sustainable society.

“As I learned more about bioponics and the potential it could offer, I began experimenting with the concept in my home city of Birmingham, but it was only when I moved to Sheffield that it gave me the confidence to turn my hobby into a business. I moved to Sheffield to start the business feeling it was a place where it could work due to its attitude to innovation and sense of community.  The people of  Sheffield seem to have a real affinity for green thinking. There is an incredible entrepreneurial spirit in Sheffield and being surrounded by people who are determined to make their mark on the world is infectious and inspired me to turn my hobby into a business.

“Luke approached Launchpad with a unique and innovative business idea in an emerging industry sector.  At the same time, he also realised it was vital to get the fundamentals of running his business right from day one. Although he is no stranger to running a business, Luke was acutely aware that there are differences between becoming self-employed and setting up a limited company, and working in a new sector posed fresh challenges, particularly when it came to understanding his legal responsibilities.

“Although it is early days for the business Luke has already established a growing client base and the steps he has taken have helped plant the seeds for significant future growth and I’m looking forward to continuing working with Luke as his business continues to grow and evolve.”

The Sheffield City Region’s Launchpad programme helps individuals who are thinking of starting their own business as well as providing ongoing support and guidance  to existing business owners. The programme is financially supported by the European Regional Development Fund and delivered by local authorities based in the Sheffield City Region and the Princes Trust. Further information can be found at: www.scrlaunchpad.co.uk