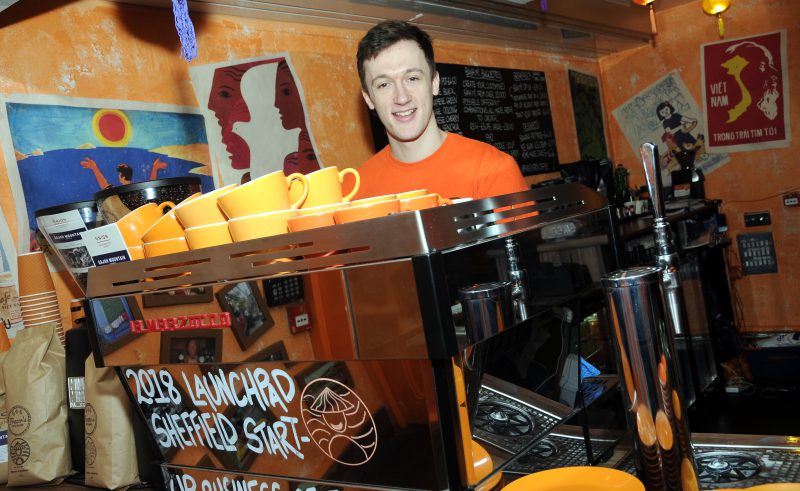 A Sheffield based entrepreneur who has brought a vision of Vietnam to the city is celebrating his first year in business after securing financial and business support from two City Region initiatives designed to support new and existing entrepreneurs.

Like many graduates, Jim Rose (24) decided to spend some time travelling after successfully completing his degree in Business Finance and Economics, but little did he know that as he began his South East Asian adventure, it would prove to be the spark which would see him embark upon building a unique career for himself.

During their first day in Saigon, Jim and his partner Melissa were awakened by the smell of rich Vietnamese coffee and decided to try the unusual tasting drink for themselves. In Vietnam, coffee is sweetened with condensed milk instead of milk and sugar and filtered through a phin filter. The result is an intense, full flavour which turned coffee hater Melissa into a coffee lover, and Jim began to realise there was a potential business opportunity hidden within the coffee beans.

Determined to act on his idea, Jim spent time learning how to become a barista and understand the workings of an independent business in a local café, whilst spending his spare time researching and refining his business ideas, putting pen to paper to create his business plan.

By July 2016, Jim had a completed business plan but needed to find the perfect premises for his new venture, so decided to contact the Sheffield City Region Launchpad programme for advice. Armed with a 100 page business plan, Jim’s business advisor helped him to clarify his ideas as well as providing him with access to a range of free-to-attend workshops where he was able to learn more about the practicalities of running a business and learning how to attract new customers.

Like many new entrepreneurs, Jim felt he’d developed a strong business case for his new Vietnamese coffee venture, but faced one final obstacle: cash. After spending time researching various different options, he decided to approach specialist lender Finance For Enterprise, who helped him to secure an initial Start-up Loan and refine his business plan to just 30 pages. Within two weeks from his initial application, Jim was able to purchase the vital kitchen appliances, furniture and decorations to transform a former Chinese restaurant into his Vietnamese dream.

Twelve months ago Jim launched his business, initially trading under the moniker Nam Song Coffee. Unsatisfied with some aspects of the business, Jim sought further advice from Finance For Enterprise and was able to secure an Enterprise Loan, enabling him to refine the café, re-brand to Five Rivers Coffee Co. and launch a retail branch to the business, selling retro posters, coffee making equipment and the all-important Vietnamese coffee beans needed to help customers recreate the unique coffee flavours sold in the shop, at home.

Almost a year later, Jim has turned a small space in the Steel City into a Vietnamese haven which serves authentic coffee and classic food dishes. Jim currently employs 10 members of staff and “the orange coffee shop” has become something of a local landmark in Broomhill.

“It was such a privilege to be able to travel across South East Asia with my girlfriend but it was Vietnam which had the biggest impact on us. The coffee experience provided me with the idea for my business and the support I’ve received from both Finance For Enterprise and the Launchpad programme helped me to refine my ideas. I think it’s easy to fall into the trap of trying to do everything all at once, but the advice I’ve received from my Launchpad business advisor helped me to identify my short, medium and long term goals and to not be afraid to ask for help when it’s needed. I felt I had hit onto a winning formula and Finance For Enterprise helped to provide the financial backing to allow me to invest in building and growing the business.

“Without the support of Finance For Enterprise and Launchpad, I simply wouldn’t have been able to achieve my dream of launching a business. Since we started trading, we’ve attracted a loyal clientele and we are using some of the proceeds of the business to support a charity called the Kianh Foundation, which helps families affected by the genetic mutations caused by Agent Orange contamination used during the Vietnam War, which continues to impact upon the health of the local population over 30 years later.”

“The success Jim has achieved in such a short space of time is incredible for a new entrepreneur and he has already made an impact within Sheffield by providing a unique experience and service coupled with a desire to support a global cause, whilst also creating more than 10 new jobs in the city.

“Like many new entrepreneurs, arguably one of the most difficult decisions to face is funding growth aspirations. We helped Jim to access the right finance options at the right time in his business journey; firstly to support the launch of his business and then the further development of his business concept with an extra loan.”

“Jim came to me with a clear idea of what he wanted to achieve and one of the most detailed business plans I think I’ve seen in my time as a business advisor! It was clear from the outset that he was a determined individual who not only wanted to achieve his goal of becoming a business owner, but who also wanted to give back to a cause which struck a chord with him on his travels.

“The Launchpad programme is designed to support entrepreneurs and start-up business owners by providing them with the right advice to enable them to launch their business, grow and succeed. The success Jim has achieved in transforming an idea that was built on a concept close to his heart made him a very worthy winner of the title of Start-up Business of the Year at our first Launchpad Awards.”

Launchpad is the Sheffield City Region Growth Hub’s key business support programme for new business. Financially supported by the European Regional Development Fund and delivered by local authorities within the Sheffield City Region and The Prince’s Trust, the programme provides free help and support to budding entrepreneurs in the City Region who are thinking of starting their own business, or have started trading within the last two years. Further information can be found at www.scrlaunchpad.co.uk