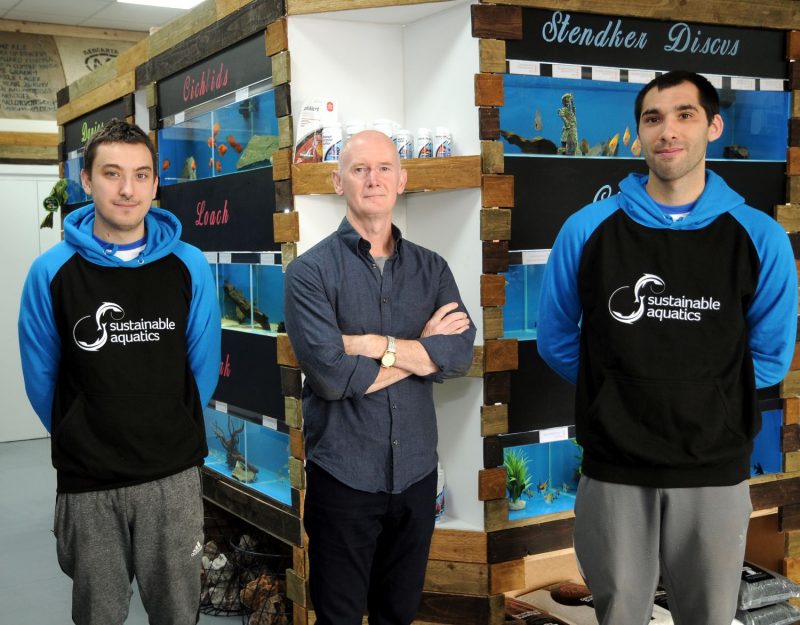 The prospect of running a business can make even the most aspirational entrepreneur feel like a fish out of water, but with a lifelong love of tropical fish, Rotherham-based Carl Goodman is setting his sights on scaling his ethical aquatics business after calling on help from the Sheffield City Region Launchpad programme.

Carl’s love of all things aquatic began in childhood. One of his earliest memories was leaving his old life behind and meeting his adoptive parents for the very first time, with just the clothes on his back and a goldfish in a bag for company.

Carl first began exploring the idea of earning a living from his long-held hobby in 2019, having spent several years working in unfulfilling customer service roles. When he discovered a pet store he had supported for many years was closing its doors, the 25 year old entrepreneur decided to take the plunge and reached out to Launchpad, a unique programme which provides tailored business support to new and aspiring entrepreneurs.

Working alongside an experienced business adviser, Carl successfully secured the licenses he needed to trade in live animals, and began putting his plans into action. Unsure whether his business idea would sink or swim, Carl decided to base his business at home and set about building a large, insulated summer house which could house a diverse range of fish.

Through his work with the Launchpad programme, Carl learned how to write a business plan, as well as gaining an insight into how to build a website and attract customers via social media. Since diving into self-employment last summer, Sustainable Aquatics has built a loyal customer base, which gave Carl the confidence to expand his business further.

Today, the little boy who found sanctuary in sea life has expanded his fledgling start-up, Sustainable Aquatics, to larger premises, creating three new jobs and a haven for aquarium enthusiasts. The new centre which is based in a converted former industrial unit at Eastwood Trading Estate has enabled Carl to increase his diverse range of freshwater and tropical fish tenfold, all of which are carefully sourced from traceable breeders from across the world.

“One of the reasons why I wanted to run my own business was to play a small part in protecting wild tropical fish stocks. As a student I was shocked to learn how marine ecosystems are being decimated, due to the practice of harvesting wild fish, which often find themselves in unsuitable aquariums across the world. I called my business Sustainable Aquatics because all the fish I sell are sourced from captivity and can be traced to individual breeders across the world.

“Although I knew a lot about how to build and manage aquariums, I knew that running a business would be a sharp learning curve, particularly when it came to making sure the company complied with current rules and regulations. I knew it was something of a minefield and after contacting my local authority for advice, I was referred to the Launchpad team who not only helped me to understand my legal responsibilities but also helped me to develop the essential business skills needed to build and grow my business.

“Working with a business adviser proved to be an invaluable experience. One of the best parts about the experience was the questions I was asked. The advice I received wasn’t prescriptive, but it helped me to draw my own conclusions and it has given me the confidence in my ideas to expand the business into new premises. It’s been an invaluable experience and one which has helped me to grow the business beyond my wildest dreams.

“My aim has always been to build a business which helps to support those interested in building their own aquariums, but also to support the broader community.  Watching an aquarium can have a positive effect on mental health and as the business has grown, I’ve been keen to use my knowledge to help others, including donating an aquarium to Rotherham Hospice, which I maintain on their behalf.

“Carl came to Launchpad with the idea for a business which was built around his knowledge and passion for aquatics. He didn’t simply want to sell tropical fish, but to educate and support his customers, so it’s perhaps unsurprising that with such a meticulous approach towards delivering excellent customer service that he quickly built a loyal customer base, giving him the confidence to grow and expand his operations.

“The success Carl has enjoyed illustrates how the support provided by Launchpad can help new entrepreneurs to overcome the potential barriers many face. Despite lockdown forcing Carl to delay the planned relocation of his new business, he has successfully adapted his business model accordingly. One of the unique elements of the Launchpad programme is that we don’t just help new entrepreneurs to create their business, but we provide ongoing support as their business grows and evolves. As Carls business enters a new phase of growth, I’m looking forward to working with him as he continues to develop and grow his business.”

As part of Sustainable Aquatic’s commitment towards supporting the local community Carl has installed a new aquarium at Rotherham Hospice which he manages and maintains free of charge.

Launchpad is the Sheffield City Region’s key business support programme for new business. Financially supported by the European Regional Development Fund and delivered by local authorities within the Sheffield City Region and the Prince’s Trust, the programme provides free help and support to budding entrepreneurs in the City Region. Entrepreneurs who access Launchpad are those who are thinking of starting their own business or have started trading within the last three years.