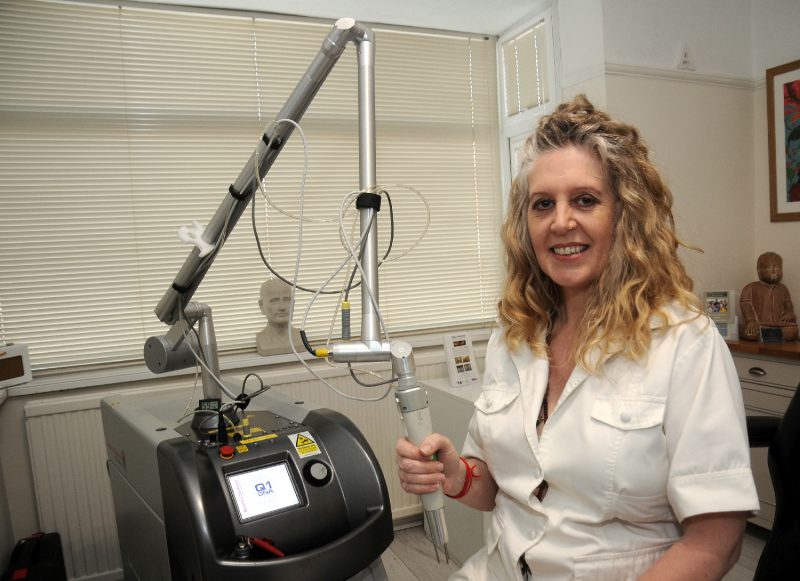 If an ill-thought out holiday tattoo or the name of an ex-partner being permanently emblazoned on your body sends a shiver down your spine, spare a thought for John Pearson who decided to support his wife’s fledgling tattoo removal business by allowing his arm to be tattooed with the company logo.
Former speech therapist Amy Pearson became so fascinated with the idea of helping people to remove tattoo horrors that in 2013 she decided to turn her back on her career in speech therapy and use her life savings to invest in a state-of-the-art laser tattoo removal machine.
Confident in the power of the machine to remove coloured tattoos, Amy recruited husband John to help her promote the business by inking both John’s and her own arm with a large company logo. Unfortunately, despite the radical step she had taken to market her business, she struggled to attract new customers and she closed the company.
A few years later, in November 2017, Amy and her husband relocated to Doncaster. Keen to continue working in tattoo removal and help people across South Yorkshire to remove embarrassing etchings from their skin, Amy decided to resurrect her business venture, calling upon help from the Sheffield City Region Launchpad programme to avoid repeating the same mistakes.
Armed with a new name for business, Tattoo Liberation, Amy quickly realised she was looking in the wrong places for her customers and, working alongside her Launchpad business advisor, began developing a social media strategy in a quest to search out South Yorkshire’s unloved body art.
At the same time, Amy felt she lacked an understanding of the skills needed to make her new business a success and decided to spend time taking part in a range of workshops delivered through the ERDF funded programme enabling her to get to grips with essential business skills including managing finance, keeping herself motivated, business growth planning and becoming a master at social media.
Amy’s £50,000 tattoo removal machine uses a photo-dynamic laser to blast ink particles under the skin, without breaking or burning it. Unlike other types of tattoo removal services, which rely upon heat to burn and break down the ink, Amy’s machine uses several light frequencies which can remove all tattoo colours and is one of just two currently operating in South Yorkshire.
After several treatments with the high-intensity light, Amy and John’s ill-advised tattoos of their original company logo were almost completely invisible and after sharing photographs of the process used to remove her husband’s tattoo via her website and newly created social media channels, Amy started receiving new requests for her services, which she says, saves people from taking radical steps to removing unwanted body art.
Amy Pearson, founder Liberation Tattoo Removal said:
“Most of our customers come to us with a tattoo they have regretted. In some cases it’s the name of an ex-partner, for others it’s the result of an ill-advised holiday prank. We’ve even treated people who have been tattooed at drunken parties and had no recollection of being inked.
“When a person has been living with a tattoo they hate, it can impact upon many different areas of their lives. In one case a client was so upset about his tattoo, he was considering using acid to burn off the body art. Getting rid of a problematic tattoo can be life-changing.
“I felt I’d got a great business idea, which really helped others but in my previous business I’d really struggled to attract customers. I was determined to learn from those mistakes and so, when I decided to resurrect the idea, I realised I needed help and reached out to Launchpad to see what help and support they could offer.
“Working with Launchpad, has been like having my own private counsellor. No matter how trivial the problem, my business advisor has been on hand to offer practical advice. The workshops have helped me to develop essential skills to give my business the best possible start and I’ve also met similar people to myself. It’s helped me to build a network of contacts who support each other and overcome the problems they are facing.
“I was incredibly apprehensive about using social media for my business but, the Launchpad team set my mind at rest and I was amazed by how quickly the business has taken off. Put simply, without the support I received from Launchpad, I wouldn’t have a business. I’d never considered marketing my business through the web or social media, but it’s had an instant effect.”
Caroline Bond, business adviser, Launchpad, said:
“Amy was new to the Doncaster area and uncertain how to build a solid customer base for her business. It was clear from the outset that she was knowledgeable and passionate about helping others, but she was unsure how to build a customer base for her business.
“The Launchpad programme was developed to help entrepreneurs like Amy to overcome the challenges they are facing, whilst helping them to develop skills which will give their new business ideas the best possible start. Taking part in the programme meant Amy was able to harness opportunities offered by social media and as a result she is now looking to secure her first business premises.”
Amy’s machine is capable of removing all tattoo types and colours, with the tattoo becoming less visible after just one session. She has used her machine to help reverse the effects of incorrectly applied permanent makeup and to remove the tattooed markers used in radiotherapy to treat cancer patients.